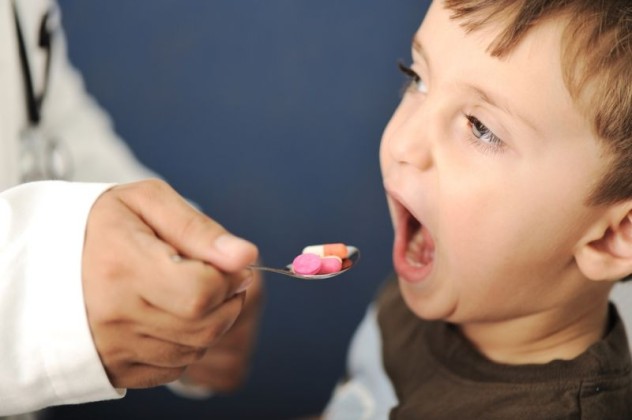 It is widely recognized that young children cannot swallow traditional tablets, but difficulty in swallowing tablets (dysphagia) is not limited to children.  An estimated 40% of adults report difficulty in swallowing tablets1, which is increasingly common among older patients.  How can the formulation scientist address these important patient needs, and how can “swallowability” even be quantitatively measured?

Regulations in the EU and US require the development of formulations suitable for dosing children from birth to adolescence. As young children cannot swallow traditional tablets and capsules, alternative dosage forms are required, such as:

But children are not the only the only ones who suffer from difficulty of swallowing, a condition known as dysphagia. Dysphagia is common among older adults as well as patients with certain neurological and degenerative disorders. EMA has prepared a reflection paper on developing medicines for older patients.

Senopsys has assessed ease-of-swallowing of a variety of oral dosage forms. The highlights of three studies are described below – mini-tablets, traditional film-coated tablets and capsules.

Multiparticulate dosage forms – granules, beads, mini-tablets – are increasingly under investigation as alternatives for pediatric (and other) patients who have difficulty swallowing traditional tablets and capsules. As described in an earlier post [Trouble with Tribbles – Bringing Mini-Tablets Under Control], there are many form and functional properties of multiparticulates that need to be considered to ensure successful dose administration, including granule size, quantity (mass), coating and selection of an appropriate dosing vehicle.

Dosing vehicles with lower tendency-to-chew and less oral cavity adhesion were found to be most strongly correlated to overall ease-of-swallowing. Mechanistically, these attributes are those related to the mastication process in the oral cavity. 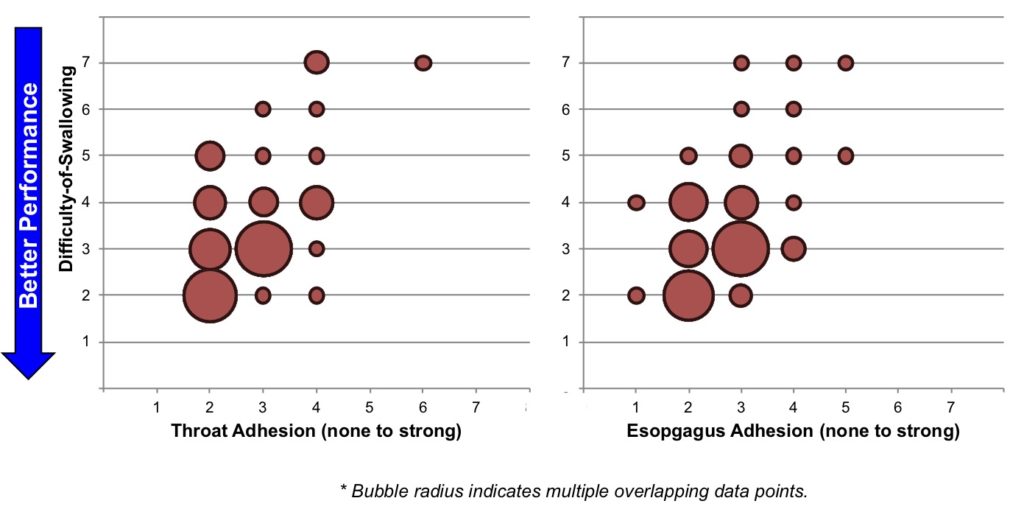 Sensory attributes related to mechanics in the throat (e.g. esophageal adhesion) were less related to ease-of-swallowing but indicate a potential for discomfort or to induce a cough response.

Even with identical coated tablets, the functional properties of the dosing vehicle can have significant impact on the overall swallowability of the dose.  Swallowability studies using trained adult sensory panels can be used to rapidly assess and down-select food dosing vehicles for confirmatory testing in the target patient population, as appropriate.

As described, patients have difficulty swallowing solid oral dosage forms due to physiological or psychological (experience based) factors. Additionally, the esophageal transit time of film-coated tablets has been reported to be shorter than that of uncoated tablets; though tablet size and shape are also contributing factors4,5.

In the following study, a film coating excipient supplier was developing new formulations to improve the “swallowability” of film coated tablets.

Six different tablet film coating prototype formulations and an uncoated comparator were measured by a trained human sensory panel for swallowability. First, the panelists trained on a series of commercial tablets and capsules using the Flavor Profile Method6, an open-source (ASTM/ISO) method of sensory analysis.  Using this method, a standardized lexicon was established to identify and define relevant texture and mouthfeel attributes and evaluation protocols. Next the sensory panelists measured the above coated prototype tablets using each of these identified sensory attributes as well as overall ease-of-swallowing. The attributes were measured during three phases of dose administration – initial roll of the tablet in the oral cavity, upon swallowing and after swallowing. 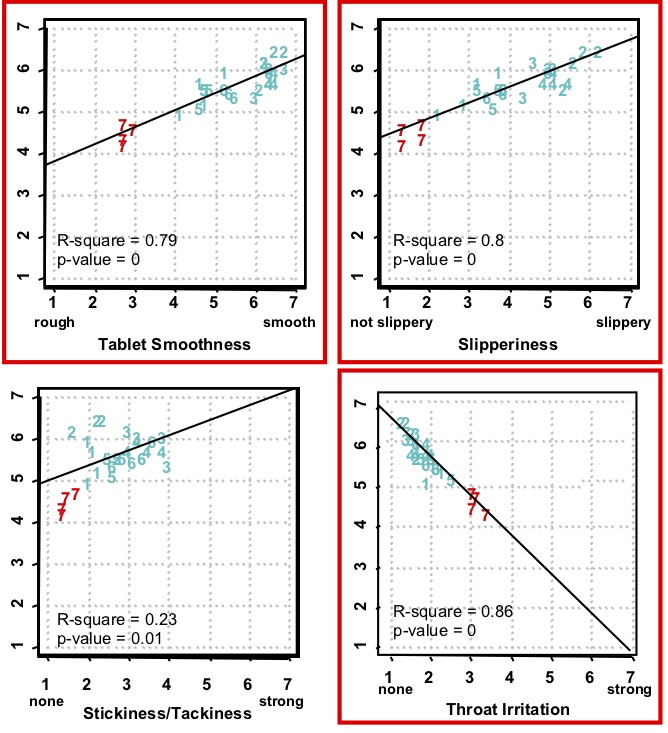 For a chronic condition with multiple daily dosing of large capsules, a developer hypothesized that their new capsules were easier to swallow than their competitor’s due to their smaller size (~30%) and different gelatin matrix. If proved true, the developer believed its product would have higher patient acceptability and compliance.

Though the prototype capsules were directionally easier to swallow, the mean ease-of-swallowing values were not found to be significantly different. 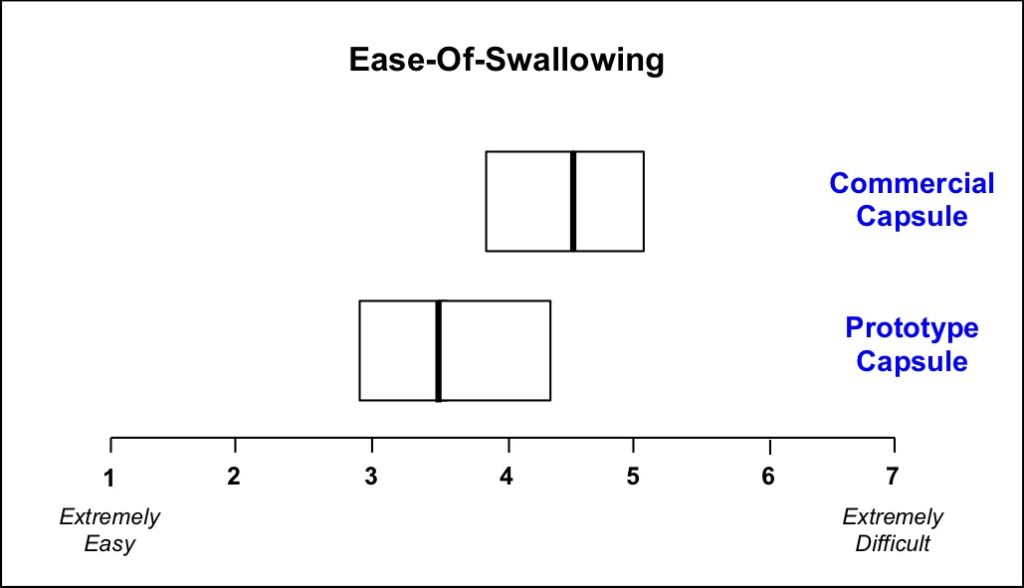 Ease-of-swallowing may not be directly proportional to capsule size, and/or this change in a gelatin matrix was insufficient to achieve statistical superiority against the reference commercial capsule.

Designing Medicines for Ease-of-Swallowing — A Recap

Mastication and swallowing are complex, developmentally-dependent physiological processes that are highly influenced by the physical and mechanical properties of the dosage form and delivery vehicle.

Multiparticulate dosage forms – granules, beads, mini-tablets – are increasingly under investigation as alternatives for pediatric (and other) patients who have difficulty swallowing traditional tablets and capsules.

Dose administration is a multi-order process. From a human factor perspective, there are multiple potential points of failure that need to be addressed to ensure successful dose administration:

Senopsys has been helping clients address these human factor / sensory issues since our founding. We welcome the opportunity to share our experience with companies interested in designing medicines for both ease-of-swallowing and palatability.

3 European Medicines Agency Committee for Medicinal Products for Human Use (2013). Guideline on pharmaceutical development of medicines for paediatric use (EMA London).

4 Perkins, A.C., Wilson, C.G., Frier, M., et. al.  The use of scintigraphy to demonstrate the rapid esophageal transit of the oval film-coated placebo risedronate tablet compared to a round uncoated placebo tablet when administered with minimal volumes of water.  Int. J. Pharm.  2001; 222: 295-303.