Taste Masking – There’s More Beneath the Hood than Bitterness 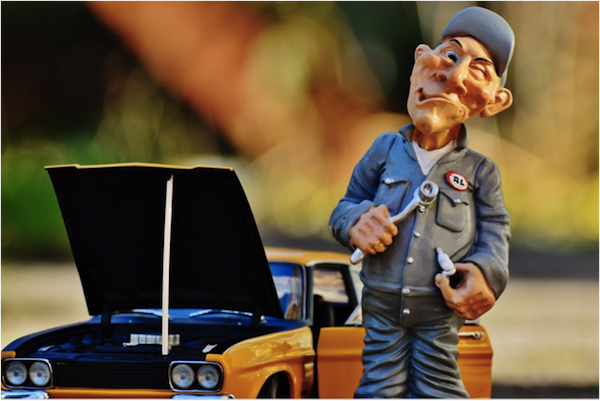 It is widely recognized that many Active Pharmaceutical Ingredients (APIs) are bitter, some extremely so. But bitterness is not the only challenge in creating palatable, patient-accepted drug products.

What are some of the other aversive sensory attributes?

To answer this question, Senopsys compiled data from 101 API taste assessment studies and the results are summarized in the pie chart below (excludes over-the-counter drugs). 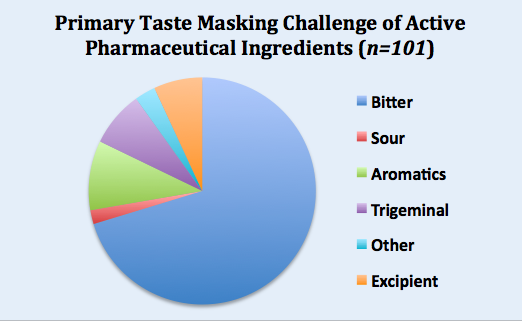 For almost three quarters of the APIs, mostly new chemical entities (NCEs), the primary taste masking challenge was bitterness. Of the other basic tastes, a few were sour (2%) or salty (combined into the “Other” category). None were found to be sweet.

Obnoxious odors (malodors) represented the primary sensory challenge for approximately 10% of APIs. Some of the descriptors of these malodors include “phenolic” (like Band-Aids), “sulfidy” (overcooked cruciferous vegetables), “oxidized oil” (like old paint), and “solventy” (e.g., acetone).

The primary challenge for 8% of the APIs was a strong intensity trigeminal irritancy (e.g., burning).

Finally, 7% of APIs were fundamentally tasteless, but their challenge was driven by the negative sensory attributes of the excipient system. 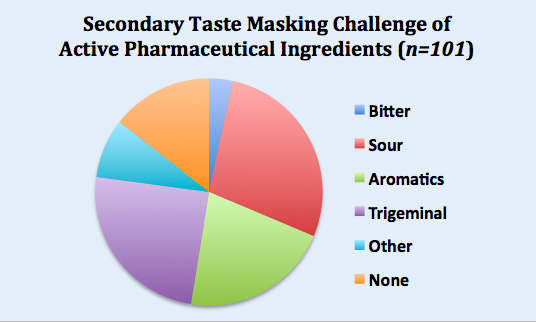 Why is it important to identify the aversive sensory attributes?

Just like the first step that my mechanic took in fixing a car was to determine which part is broken, diagnosing the challenge of the API is a formulator’s first step is fixing a “palatability” issue. Taste, smell, and irritation represent different perception pathways and importantly, the approach for dealing with each is fundamentally different.

As we discussed in an earlier post, “Taste” refers to those sensations – sweet, sour salty and bitter – perceived through stimulation of the receptor cells located in the taste buds on the tongue and oral cavity. Taste issues are addressed via balancing their intensity with the application of other basic tastes to minimize the perception of each individually.

Negative aromas may be minimized through the judicious incorporation of commercial “flavors” which are mixtures of aroma chemicals that are perceived through the sense of smell (olfaction) – orange, strawberry, mint. These have no effect in reducing bitterness or the other so called basic tastes – sweet, sour and salty

Similarly, compounds such as capsicum (red pepper), piperine (black pepper) and many APIs produce a burning sensation when the Trigeminal nerve is activated (chemesthesis). The addition of tastants or odorants (flavors) has no effect on burning in the same way aspirin would not be administered to treat a bacterial infection.

So how are the critical aversive sensory attributes measured to diagnose the problem?

Many approaches have been explored over the years to characterize and quantify the sensory attributes of APIs and drug products. These include non-human in-vivo models, in-vitro techniques and sensory analysis by trained subjects, as described in an earlier post. While many of the in-vivo and in-vitro techniques may provide an indication of a palatability issue, sensory analysis using trained subjects remains the definitive method for identifying and quantifying the attributes of APIs and drug products.

To illustrate quantitative sensory analysis in practice, shown below are the Flavor Profile results for an NCE indicated for oncology. Clinical studies of the drug were truncated due to strong positive results in adults and a pediatric dosage form was urgently required. The analysis was conducted to identify and quantify the aversive sensory attributes of the API as necessary to inform the development of a palatable, age-appropriate formulation.

In Flavor Profile analysis, the panelists separate flavor into its components, measuring the individual attributes in the order they were perceived. Conceptually, the initial (Time = 0) sensory data is analogous to a chromatogram depicting a complex mixture separated into its individual chemical constituents. 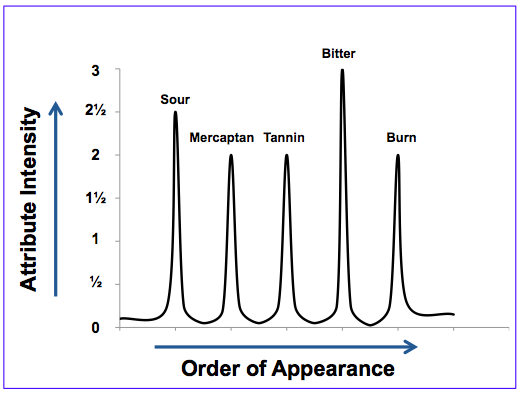 Palatable drug products are those in which the aversive sensory attributes are below the perception threshold, which corresponds to a 1 on the Flavor Profile scale. Clearly the oncology API represents a multidimensional taste challenge, specifically sour and bitter basic tastes, mercaptan (skunky) aromatics, and burning and tannin mouthfeels.

Many foods and beverages have strong intensity attributes that are perceived immediately upon mastication but quickly diminish in the aftertaste. In contrast, the aversive attributes of many APIs can linger in the aftertaste for 10, 20, 30 minutes or even hours. From a taste masking perspective, ameliorating the lingering effects of long-lived bitterness is far more challenging than short acting compounds such as caffeine. As shown below for the oncology API, skunky aromatics faded quickly in the aftertaste, as did sourness. However bitterness and mouthfeels lingered for at least 30 minutes. 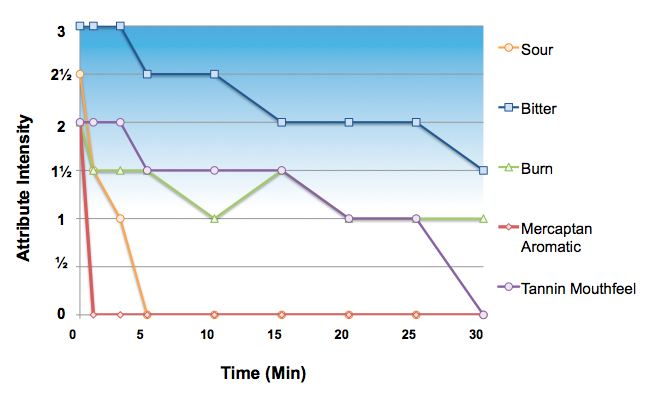 The oncology API represents a very difficult taste masking challenge less due to the intensity and more so the duration of multiple aversive taste, smell and trigeminal attributes. Based on empirical formulation experience, a technology that effectively “sequesters” the API from the receptors such as particle coating/encapsulation, complexation or adsorption will be required to develop a palatable pediatric formulation for this drug product.