Challenge: Technology advances are leading to the development of novel oral dosage forms that may provide faster onset of action, fewer side effects and improved patient dosing (convenience). One such technology is oral sprays. Oral spray systems are capable of delivering a broad range of APIs to the systemic circulation through the highly perfused lining of the oral cavity. However, when administered via this route, many API’s have bitter or other undesirable taste characteristics that need to be masked in order to develop palatable, patient-acceptable drug products.

Senopsys Approach:  Senopsys followed a three-step process to improve the palatability of an extremely bitter oral spray with trigeminal irritation (burning) and aromatics from the solvent system.  To reduce human exposure to drug substances during development, the first step was to develop a mimetic (“placebo”) system using Generally Recognized as Safe (GRAS) or FDA-listed excipients that match the critical sensory attributes of the API.  The next step was to reduce the API bitterness by balancing with the complementary basic tastes – sweet, sour and salty. This is referred to as creating a neutral or “white” taste, which is the absence of taste and represents a foundational principle of taste masking. A “sensate” compound was added to produce a beneficial cooling mouthfeel, without menthol aromatics, to counteract the burning mouthfeel of the solvent system.  Next flavors were evaluated for compatibility with sensory attributes of the excipient system, namely to reduce the solvent aroma. Finally the sensory performance of the leading flavored formulations was verified in the API-containing drug product and final adjustments made to account for perceived differences between the API and mimetic.

Results:  The sensory-directed formulation development approach described above resulted in a palatable oral spray prototype in which the extreme bitterness and the burning mouthfeel were substantially reduced and the solvent aroma eliminated. The taste optimized drug product is under commercial development. 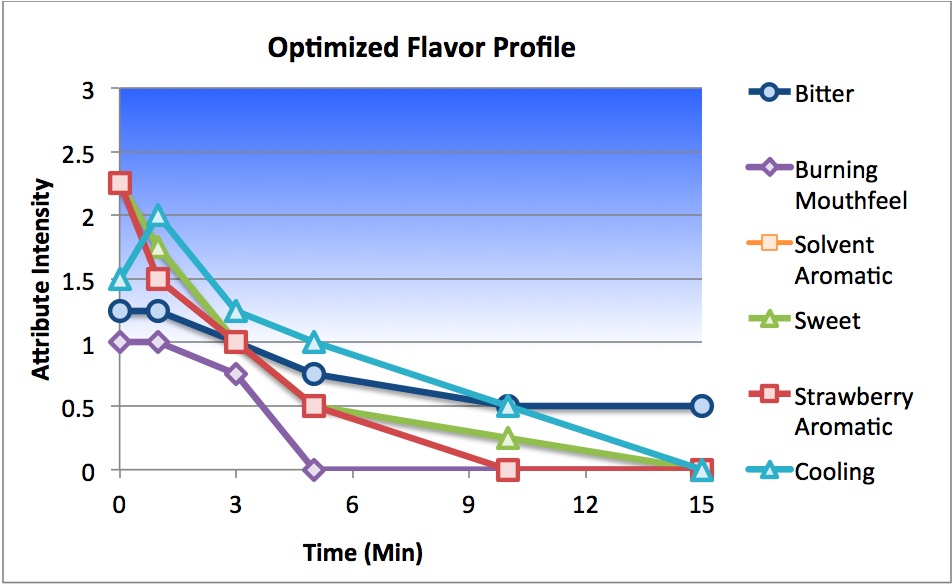