Challenge: The client’s liquid drug product was rejected by a significant number of adult clinical trial subjects due to its poor palatability.  Senopsys’ initial taste assessment found the drug product to be both salty and to a lesser extent bitter.  These aversive attributes were further exacerbated by a large dose volume (>100mL)

Senopsys Approach: The strategy for developing a palatable formulation of this drug product for clinical trials was to first reduce the aversive attributes, specifically the salty and bitter tastes.  This is commonly referred to as creating a “neutral” tasting (“white”) base. A neutral tasting base exhibits balanced basic tastes (sweet, sour, salty and bitter), which is a foundational principle of drug palatability.  Once the basic taste balance had been improved, the identifying flavor aromatics were incorporated. Senopsys’ trained panelists evaluated the samples using the Flavor Profile method of quantitative sensory analysis. Experienced formulators guided taste optimization based on their knowledge of flavor construction, excipient functionality and processing technology.

Results:  Through an iterative process of rapid formulation prototyping and sensory evaluation, a series of palatable prototypes were developed to support clinical/commercial development. The four basic tastes of the drug product initially and following taste optimization are shown below in a “radar plot.” The dashed black line represents the four basic tastes, balanced at a slight intensity – the level that is just discernable to most patients – which served as the formulation target. Both saltiness and bitterness were reduced, resulting in greater balance – approaching the target. The resulting sweet and sour intensity of the optimized formulations are somewhat higher than salty and bitter, as was necessary to reduce the intensity of these two aversive attributes. While not ideally balanced, the sweet/sour ratio of the resulting drug product is expected to be significantly more patient-tolerable than salty/bitter, particularly for a large dose volume. 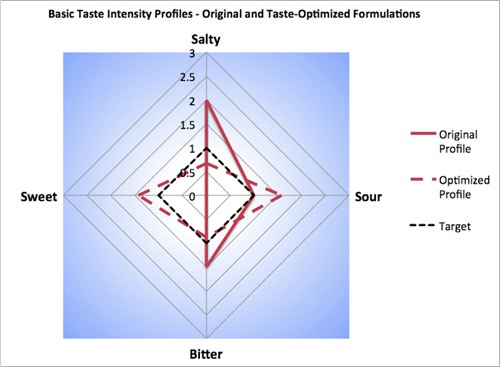