Challenge: Clinical studies of the client’s drug were truncated due to strong positive results in adults and a pediatric dosage form was urgently required. Senopsys’ initial taste assessment* indicated that the API represented a difficult, multidimensional taste challenge, specifically strong intensity bitterness, tongue/throat burn and tannin mouthfeels that lingered for over 30 minutes.

Senopsys Approach: Senopsys followed its proven sensory-directed approach to improve the palatability of an oral liquid dosage form to support early pediatric clinical trials.  To minimize human exposure to the API, a mimetic (“placebo”) formulation was developed to simulate the critical sensory attributes of the API.  Senopsys’ experienced formulators identified candidate excipients, food ingredients and other Generally Recognized as Safe (GRAS) compounds for each of the API’s critical sensory attributes – bitterness, trigeminal irritation (tongue/throat burn) and tannin mouthfeel. The candidates were compounded into the placebo base formulation, evaluated by Senopsys’ trained sensory panels and the results compared to the initial time-intensity profiles. The process continued in an iterative fashion until a suitable mimetic system was developed to support taste optimization.

Results: As many APIs are known to be bitter, replicating the bitterness profile of the API was straightforward.  Several candidates were explored, with denatonium benzoate most closely approximating the strong and lingering bitterness of the API.  Replicating the API’s tongue/throat burn and tannin mouthfeel was more difficult and numerous compounds were evaluated for each effect. Ultimately piperine (the compound responsible for the burn of black pepper) was selected as an appropriate simulant for the tongue/throat burn and alum (potassium aluminum sulfate, used in pickling) for the tannin mouthfeel. 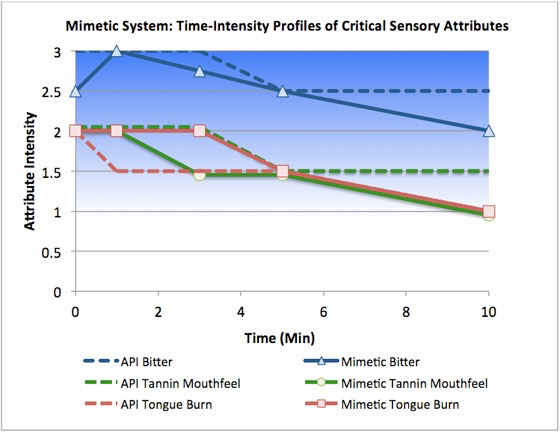 Following Senopsys’ sensory-directed formulation approach, the API bitterness was reduced through judicious balancing with the complementary basic tastes – sweet, sour and salty. Reducing the perceived intensity of the mouthfeels was much more difficult. Based on their effects in various food products, Senopsys formulators and panelists selected and evaluated numerous categories of “taste modifiers” for their effectiveness in reducing the perceived burn and tannin mouthfeels, including, proteins, polysaccharides, cellulosics, polymers and sensates (numbing and cooling). Several promising candidates emerged that significantly reduced, but not eliminated, the trigeminal irritation of the API. The resulting formulation has been tolerated by 1 and 2 year olds in clinical trials.