Challenge: The client needed to develop a palatable dosage form, capable of delivering 5gm of a polymeric API per unit dose. The goal of this project was to identify, develop and evaluate candidate dosage forms – both traditional and novel – that could accommodate the high drug loading and minimize the perceived gritty mouthfeel of the insoluble API. The maximum volume for liquid dose prototypes was 35mL and as small as practicable for solids. There were considerable excipient restrictions due to the indication that further constrained the formulation design space.

Senopsys Approach:  Many dosage forms and pharmaceutical technologies trace their origins to the food industry, which continues to be a rich source of inspiration that can be adapted by pharmaceutical scientists to develop palatable drug products. Senopsys applied its FlavorOptSM formulation development approach that was created during our team’s decades of experience in the highly competitive food industry, where taste is paramount.  Using this sensory-directed approach that features rapid formulation prototyping and taste assessment by trained human panelists, Senopsys food and pharmaceutical scientists developed a range of proof-of-concept dosage forms for evaluation by the client. These included:

Results: Following the sensory-directed formulation approach, a series of palatable prototype formulations were developed for each dosage form. Based on input from marketing and clinical groups, the client has identified a lead dosage form to support initial launch and is exploring options for commercializing “novel” dosage forms as part of its product lifecycle management plan. 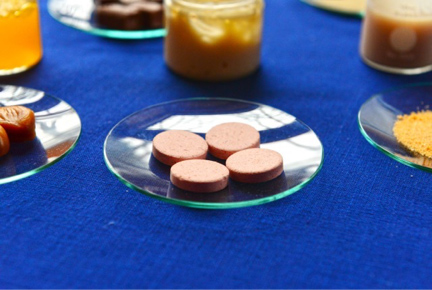