Matching the Taste of a Placebo to a Drug: Reduce Unblinding in Clinical Trials

To ensure the integrity of clinical trials, it is important that subjects not be able to perceive differences between the active and placebo formulations.  Based on anecdotal evidence, a client was concerned about the potential for unblinding due to differences in taste between the drug product and placebo.

Senopsys Approach: Placebos are frequently the same formulation as the drug product, minus the API. While this approach may work for many dosage forms (e.g., film-coated tablets and capsules) it generally does not for liquids, powders, chewable/orally disintegrating tablets unless the API is very “bland” tasting, i.e., does not contribute significant taste, aroma, or trigeminal effects. To minimize the potential for unblinding in the clinic, it is important that perceived differences between the active and placebo formulations be minimized. 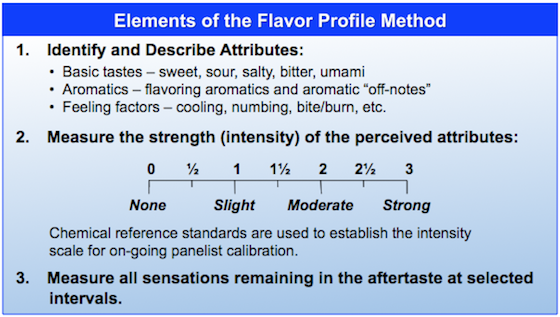 Results:  The Flavor Profile for the liquid drug product and placebo are shown below. The drug product is characterized by bitter basic taste, solvent aromatics and mouthfeel effects. The API-containing formulation is substantially more bitter than the placebo, with greater trigeminal irritation (tongue sting).  In general, differences of ½ on the Flavor Profile scale are perceptible to patients/subjects. As bitterness of the drug product is 1 full unit higher in intensity, it will be readily apparent to the subjects.  The tongue sting on the other hand is only ½ unit higher in the API-containing formulation and may not be perceptible as it’s just at the perception threshold (1 on the Flavor Profile scale).

Based on the magnitude of the perceived differences, the risk for unblinding in the clinic was determined to be distinct possibility.

There are two approaches for addressing this issue. The simplest is to add Generally Recognized as Safe (GRAS) excipients to the placebo to replicate the sensory attributes of the drug product – in this case a bittering agent. This approach may be viable for clinical trial materials but is not recommended for commercial formulations.

The second approach is to reformulate the drug product to reduce the perception of the aversive attributes (e.g., bitterness) and then develop a placebo to match. The choice is informed by clinical stage, degree of palatability (i.e., ease of dose administration) and magnitude of the differences between the drug product and placebo.