The free base form of the API in a marketed product was known to be extremely bitter, generating numerous patient complaints. The client prepared and screened a large number of API salts using an electronic tongue (e-tongue) with a goal of identifying significantly less bitter candidates. However in the absence of correlation of the e-tongue and human taste panel results, the client could not be certain that one or more of the salts was in fact less bitter than the free base. To explore the relationship, the client selected six API salts – three predicted by e-tongue to be more bitter than the free base and three less bitter.

Senopsys Approach: Aqueous solutions of the six salts were by evaluated by Senopsys’ sensory panelists following a randomized (blind) design. The concentration of each corresponded to the strength of the marketed free base API. The panelists evaluated a 5 mL aliquot of each sample following a “swish and spit” protocol to minimize exposure to the drug actives. Each sample was evaluated in triplicate. Bitter intensity was measured on the Flavor Profile scale and the panelists calibrated using intensity reference standards each day. The results were compared to the previously evaluated API free base.

Results: A correlation between the e-tongue results and human taste panel results could not be established. Only one of the six salts was found to be less bitter than the API free base, which was actually one of three salts predicted by e-tongue to be more bitter than the free base. Differences in bitterness were very small and not likely patient-perceptible and none of the salts approached the target of a slight (1) intensity or even produced a step-change reduction in bitterness. In this study, use of the human taste panel avoided a costly error in selecting and advancing an API salt based on e-tongue results that did not offer patient-perceptible benefit over the existing marketed product. 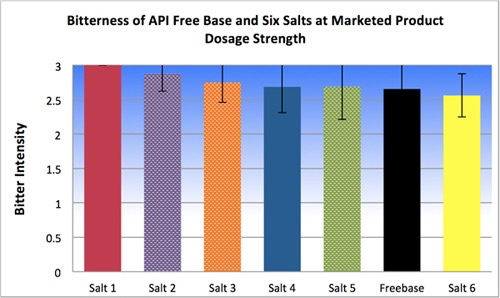 The results of this study match Senopsys’ experience in food, pharmaceutical, and allied industries, where electronic tongues are typically used to measure differences from a control.  Accordingly, e-tongues are employed in QA/QC environments, comparing manufactured lots to an established product profile.  Inconsistent correlation to human results in new products makes the utility of e-tongues in a development environments comparatively limited.